If you happen to be visiting Kona, Hawaii anytime during October, you will probably notice the huge amount of hard bodied athletes that continuously run and bike up and down the Kona coast. That’s because Kona is host to the Ironman World Championship, one of the world’s toughest and most physically/mentally demanding triathlons. Every year over 2,000 of the world’s best tri-athletes travel to Kona, Hawaii to see if they have what it takes to become the ultimate Ironman.

The Ironman World Championship starts with a 2.4 mile swim which begins and ends at the Kailua Kona Pier in town. The race then continues with a grueling 112 mile bike ride in which competitors head north through extremely hot lava fields, wind gusts up to 25 mph and scorching hot temperatures. Once the racers reach Hawi, a small village on the northern part of the Big Island, it time to turn around and head back the same way. Once back in Kona, the marathon portion of the race begins. The 26.2 mile marathon course is set up on the same highway that is used for the biking portion of the race. The race ends on Alii Drive in Kona. Those who survive the grueling 140.6 mile race are met by thousands of cheering fans at the finish line.

The Ironman World Championship in Kailua-Kona is an invite only competition. Athletes must compete in Ironman competitions in their area and place within the top ranks depending on their age group in order to qualify for the event here in Kona. This means that for almost a month, Kona is home to some of the best athletes from all around the world. Over 2000 Ironman competitors enter the water at Kailua Kona Pier The 112 mile bike up the Kona coast The final 26.2 miles of the Ironman The Ironman begins at Kailua Kona peir with a 2.4 mile swim 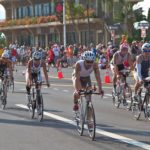